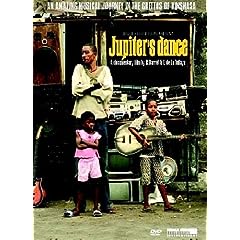 .
---
There will be food available for donation to raise money for the Tuesday Night Project, which is a popular weekly social night at Refugee Forum for asylum seekers / refugees and members of the host community. Click on Read more for more info about the film.
---
To get involved with the Nottingham & Notts Refugee Forum, visit: http://www.nottsrefugeeforum.org.uk/

An exhilarating jaunt through the ghettos of Kinshasa to meet musicians who struggle to emerge from the chaos: rappers, handicapped bluesmen, griots, street children, inventors of instruments, and ndombolo musicians. Jupiter, the charismatic leader of the band Okwess International, serves as guide and narrator as he describes his city and his long battle to break out of the ghetto with his music. “The DRC has 450 ethnic groups and thousands of untapped musical resources. We’re sleeping on a mattress stuffed with dollars, yet we’re starving!” Jupiter’s Dance presents a very different African reality than the one we are accustomed to witnessing in the news media.

This has to be one of the outstanding packages on Congolese music of the past decade. French producers Renaud Barret and Florent de La Tullaye have made this panorama of Kinshasa’s urban sounds something of a labour of love. Thanks to the multiplicity of engrossing characters, in-depth research and superb editing, the viewer is hooked from the start. The 73’ documentary takes us into the depths of Congo’s largest ghettoes where street children, beggars, prostitutes and disabled victims of polio, strive to find their daily bread in an urban jungle that has plummeted into poverty and violence unimaginable four decades ago. Yet, in their first-ever film La Tullaye and Barret have shown how music is allowing these disenfranchised Congolese to stand up and be counted.

At the heart of this defiance stands Jupiter, an African Don Quixote with a cavernous voice and straight-shooting vision. “Kinshasa is the capital of the world, but for the moment, it’s a pile of shit,” he quips over a beer. Somehow, this self-styled “rebel general” has culled traditional music from the 450 ethno-linguistic groups that make up Congo, and forged them into a luminous folk-blues he calls “Bofenia rock”. Where he comes from and how he managed this prowess, is left to the viewer’s imagination, as the producers concentrate on the here-and-now. Thus, we are plunged into the entrails of a city that used to be called “Kinshasa the beautiful” and is now labelled “Kinshasa the dump”.

The poverty, filth, heat and humidity today dominate the metropolis and its 7-10 million inhabitants. It permeates each shot of Jupiter’s Dance. But so does the energy and imagination of the dozens of artists that the film encounters. Instruments are fabricated from string, water, discarded wood and tin cans. Verses are snatched from the hallucinating day-to-day life of these musical survivors to form lingala rap, urban soul, rumba-blues, electro-trad or Swahili ragga. “Always repressed, never depressed,” is the defiant catch-phrase of urban artists that go by the name of Staff Benda Bilili, ABC Star, Rinka, Benson de la Rue or Lexus Legal. These street poets denounce the spiralling war, injustice, misery and corruption around them. They point to the most vulnerable victims: hordes of children who have been abandoned by a phantom state and an impoverished education system. They are at the heart of this documentary.

“This is the time to speak out,” says Jupiter, “otherwise we are worthless. There is still a dictatorship here, but things are changing.” Adds Rock B, who is the city’s first rapper in lingala: “We’ve got fire in our stomachs. We have things to say.” Despite the squalor, Jupiter is convinced his life-mission to change the country will be attained, if not by him then by the generation that is yapping at his heels. The documentary ends with the skeletal singer organising a free concert in one of Kinshasa’s most impoverished neighbourhoods. Predictably, an electricity power cut brings the curtain down in the middle of the concert – and sweeps the film to an abrupt end.

We are left with the 11 tracks of the CD, a production lovingly recorded by Yoral Poupaud, former member of the mythical Fédération Français de Funk, FFF. This album captures the vibrancy of Jupiter’s ten musicians who hail from a diversity of Congolese regions. Its highlights, “Mwana Yoka Toli”, Solobomé” and especially “Bana Congo”, underline the attaching qualities of Jupiter’s voice and his excellent arrangements. The “rebel general” and his Okwess International band are preparing a second, all-electric, album. Meanwhile, his French producers are working with the eight members of the Staff Benda Bilili. These street musicians are victims of polio and confined to wheelchairs. Their disability did not prevent them from releasing a song called “Let’s Go and Vote” which was a major hit in 2006.

The song is also at the heart of a heated polemic. The group is hoping to take the United Nations peacekeeping mission, the MONUC, to court after they were only paid 50$ each for it. “It is thanks to our song that people went and voted,” protested band leader Nzale Makembo, in an interview with the BBC, “But MONUC did not pay us…This is slavery.” SBB are asking for $100,000 in reparation. The MONUC has an annual budget of $1bn. This showdown is likely to be part of the film that Barret and La Tullaye have made on the group, due out in October 2007. Meanwhile, their masterpiece Jupiter’s Dance should be obligatory viewing for all lovers of African music, as well as those who want to admire the defiance of the human spirit in this beleaguered nation.